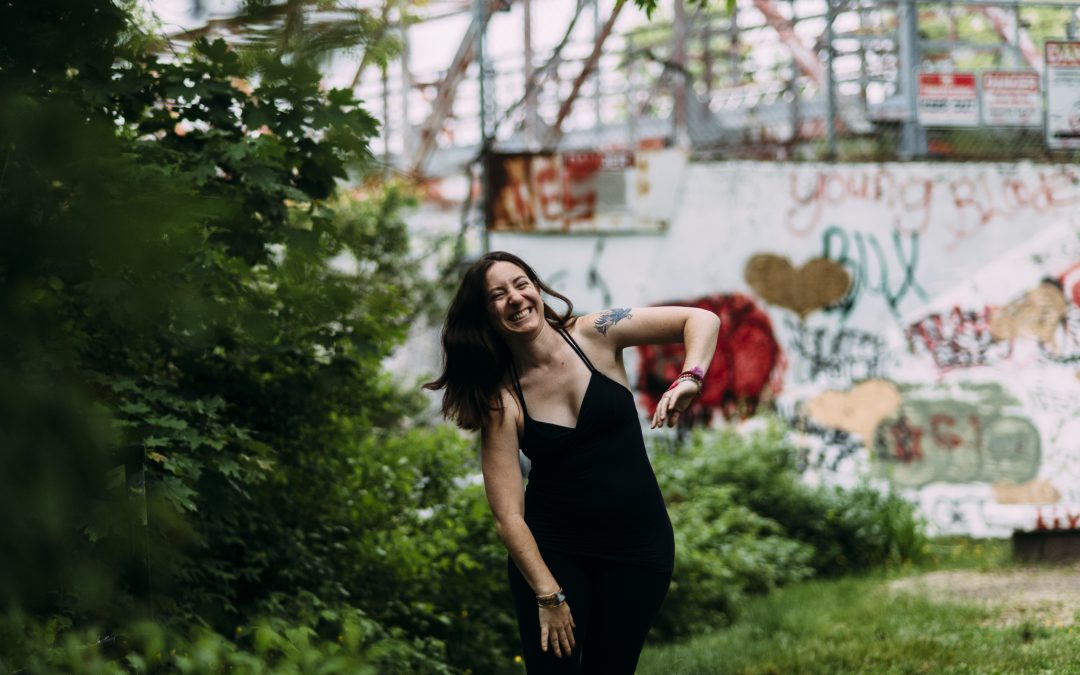 Yoga started for me as an escape from a stressful situation. I was living in New York City in a tiny apartment where there was never silence, and it did not agree with me. I spent that year in New York waiting for the lease to be over so I could get out of there; to cope, I would go to yoga and find an hour of quiet time and get away from the hustle and bustle of the city.

My yoga time became precious time to connect with my breath and quiet my mind. The movements left me feeling content and connected to myself in a way I had not experienced before. That deep feeling of connection is what took my breath away and made me fall so deeply in love with yoga.

Attending yoga teacher training had never occurred to me until an instructor whose class really resonated with me suggested I consider training. I laughed at the idea, but the more I thought about it, the more it felt like something I was being called to explore. My physical practice wasn’t necessarily strong, and at the time, I thought to be a teacher, you had to be able to do headstands and splits and all the crazy balancing poses with ease. When it came down to it, however, teacher training (and yoga!) literally had nothing to do with perfect poses.

At the start of training, I wanted to learn more about yoga, the philosophy, theory and history of it, as well as my own practice. I thought it would be so incredible to be an expert in how my own body could move, and why. I dove in. After my first day of training, I pulled a friend aside (she had already graduated from the same program I enrolled in) and told her, “I just have a feeling about teaching; it feels like I’m stepping into who I am. I feel like I could see myself doing this full time one day.”

Everyone I spoke to about their teacher training experience described it as life changing, and wow was it ever! After the first weekend and a deep dive into meditation and philosophy, I was floored (jaw to the ground, socks knocked off, obsessed with all things related to yoga). I felt my perspective begin to shift as I took in new information and new ways of seeing things.

Halfway through my teacher training, I got hit by a car while crossing the street and fractured my pelvis and sacrum. I remember moments after the accident, laying on the ground trying to figure out what had happened and realizing I had been hit, I thought, “Can I move my leg?  Will I be able to do half moon pose after this?”

My recovery was just under three months, during which time I couldn’t work and pretty much had to stay still so my body could heal itself. Sitting with that stillness felt like it was going to be impossible. I was in the middle of a somewhat competitive career track, on a roll at work, and hungry for a promotion.  Those things had, up until that point, taken up most of my head space.  The training, the philosophy, the meditation, and the amazing community I was connected to through yoga got me through that tough time and really grounded me in how lucky I was just to be alive. Suddenly the obsession with work and with getting ahead at work seemed to matter very little. With the tools of the training, with the philosophy behind the training, when I looked at what was stopping me from living fully and in the moment, I realized the only thing was me.

Once I recovered, I moved to Maine.  A few months later I met my husband. Once I completed my teacher training, I began to teach more and more, finding myself wanting to spend all of my free time teaching and practicing yoga. I was feeling the pull to teach yoga full time and could think of little else.  I realized there is no moment like the present to follow a dream. With a big leap of faith, I opened Samudra Studio in May 2016. Teacher training allowed me to move past some of the fears that had made me feel like I wasn’t “ready” and to look at my life as a precious opportunity not to be wasted obsessing over fears and “what ifs.” I never would have taken that leap (those many leaps!) if not for teacher training and the incredible role models and support that I found through the Fluid yoga family.

I met some of the most incredible people through the training and through yoga, and it has been such a joy and honor to get to create that sense of yoga family and community here in Saco. When I opened Samudra, my goal was to create a space that would not only offer a variety of yoga classes, but also be a platform for education. I am working with my mentors to introduce yoga teacher training to the studio this fall.

There are a million reasons to talk yourself out of exploring your practice in a deeper way through training, but if you have considered yoga teacher training, don’t overthink it. When you find something that really resonates and inspires you,  it’s important to listen to your heart.