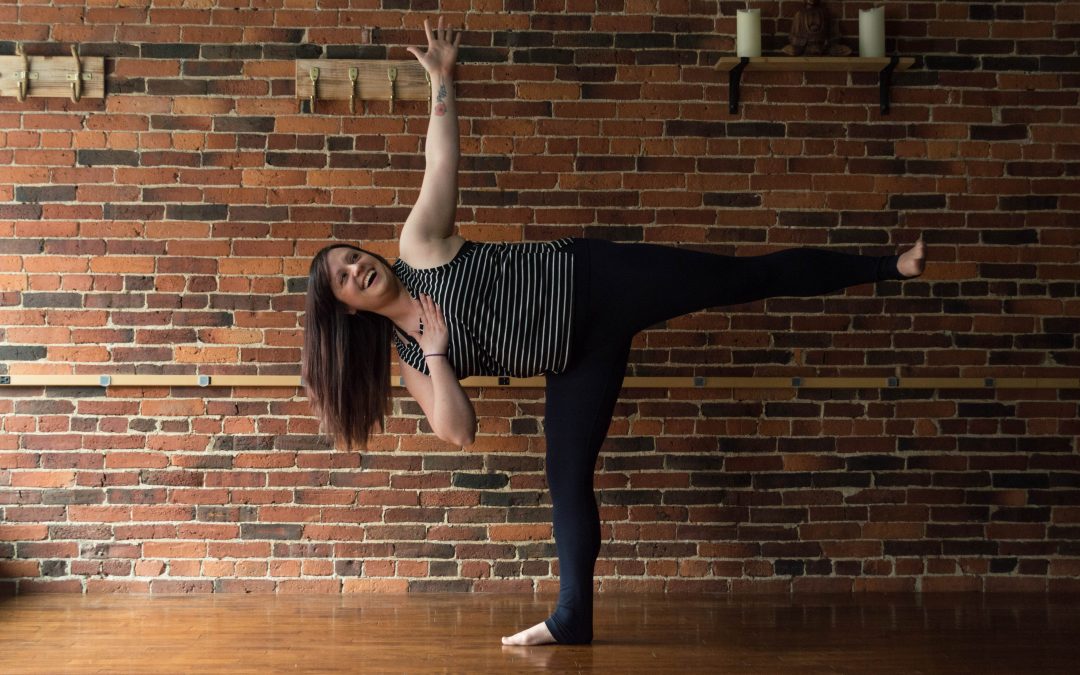 Exhale, knit your ribs in as you find a subtle back bend.

Follow your breath as energy radiates through your fingertips.

Find a softening in your face.

What does any of this mean? I was in my first yoga class lost in a sea of cues. Everyone else in the class flowed through each pose with ease and grace, and there I was trying to figure out what it meant to knit in my ribs.

I went to my first yoga class after some convincing from my closest friend.  She swore I would love it, after she had just finished saying she spent over half of her most recent class in child’s pose.  At the time I had a “home practice” (my favorite yoga DVD in my living room next to my dogs and maybe my husband) and yoga for me was strictly for stretching my muscles, nothing more. I wasn’t intimidated by the idea of class, but I wasn’t sold either.

As I crossed the threshold into the studio, I realized this wasn’t just stretching.  The studio had liveliness to it and the people weren’t just moving their bodies, they were living this practice. I couldn’t articulate it, but I could feel it. I realized I was the “newbie” of the class as we settled down on our mats. I wasn’t looking forward to feeling like a fish-out-of-water, but still, I was excited to try something new.

Once class began everyone turned their focus to their body, breath, and space. No one was paying attention to me.  I felt relieved and allowed myself to drop my insecurities. I was able to enjoy being present in the moment. Sure, a lot of the cues were lost on me. I followed along, mirroring the instructor and other students, but I still didn’t know what it meant to “engage my side body” or “puff my heart.” Overtime, I gained a deeper awareness of my body and the meaning behind the cues was cultivated each time I found time and space to build on my practice.

Zip your belly in and up.

Melt your shoulders down your back.

Find stability through your core.

What core? My yoga practice had been on hold during my pregnancy, and I was returning to the mat four months postpartum. My core didn’t seem to exist, nor did it provide stability (and I was convinced it never would). My shoulders were so drawn forward from constantly holding a baby that the idea of melting them down my back sounded physically impossible. My body felt so unfamiliar and I was convinced I would never be able to access poses I once found with ease.

As the teacher assisted my poses, I was sure she could smell nothing but baby spit up. I wanted to catch her eye and apologize, but then I worried she would see the heaviness in my eyelids and tell me to just go home. Still, in all this angst and frustration I found the constant rise and fall to my breath.  The instructor reminded me to stay in the present moment and become aware of my body on the mat. I listened to my breath, allowing it to be a reassuring voice, rather than a critical one. I heard the voice of one of my early yoga teachers, who would say, “If you’re breathing on your mat, you’re doing yoga!” So I settled in and continued breathing.

And I kept showing up.  Now, over a year postpartum, I am finally able to find the twists and binds and balance the way I used to. It still feels different, some days easier than others, but if you allow it, the practice works. Our body and our poses will always ebb and flow just like our breath, but we find steadiness with each inhale, grace with each exhale, and the rest will fall into place.

The language of yoga that sounded so foreign to me during my first in-studio experience ten years ago is now part of my vocabulary. I can knit in my ribs to find stability through my core, I can melt the stress away as I allow tension in my shoulders to ease, I can find the softening in my face, and I can feel the energy radiate through my fingertips.

Sarah Lafortune has been a member at Samudra since the studio first opened, and teaches classes on Tuesday nights, Friday nights, and a beginner workshop on Saturdays.